Sidecar Bakery serves made-on-the-spot beignets and other scrumptious pastries from a bicycle on the streets of Springfield, Massachusetts. It's a crazy idea, that much is clear. But before we get into the details, let's get a few facts settled. ​ 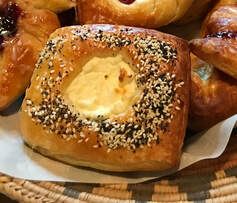 Ok, here's a helpful FAQ if you want to learn more:

Q: How are beignets made?
A: With patience. Our French recipe is the epitome of slow cooking. Beignet dough rises three times and flavors for 28 hours, but one bite and you'll know it's well worth the wait. Everything we put into our beignets (and our other pastries) is fresh and high quality.

Q: Are beignets the same as fried dough?
A: No. Customers have called them "pillows of love" and "banging", but not fried dough. After you try one, you'll  know for yourself.

Q: What toppings do you offer?
A: We offer beignets 4 different ways: the Parisian, cinnamon sugar; the Nola, powdered sugar; the Tru-dough, maple sugar; or the Ool La Doo, Coconut Indian spice.

Q: How does the bike work?
A: The Sidecar Bakery-mobile is a modified version of a cheap bicycle.  It has an extension on the back (a free radical by Xtracycle that the good folks at Family Bike assembled) that makes the bike significantly longer. This makes it possible to include a sidecar platform with a small kitchen, built by furniture maker Nicolas Jones from Whately, MA. You haven't seen anything like it. The only thing sweeter than the bike are the beignets.

Q: This all seems a bit too wacky for Springfield. Why don't you go Northampton, MA?
A: Sometimes  folks tell me I should go to Northampton or Amherst.  I know they mean it as a compliment, and I'm sure I could sell a bunch of pastry up there. But the idea of Sidecar Bakery was to be a part of a real diversity and urban life.  In Springfield, Puerto-Rican grandmothers sell limbers from front steps, and second languages are taught outside of the classroom. Here the flan and the peach cobbler are the real deal.  The Indian food is Indian and the Italian grub is Italian. Disney-fied diversity you can find elsewhere.
​         Granted, living in a city with diverse cultures and communities it isn't always easy, but it is never superficial.  Springfield offers folks the joy of encountering the unexpected. Sidecar Bakery, the little French bakery on a bike,  is delighted to be a part of that vibe.